As children, we are often told by our well-meaning older relatives (usually in an attempt to get us to eat our vegetables) that eating carrots will let us to see in the dark. Although it’s considered to be common knowledge (you may have even repeated the tale to your own children), it’s not strictly true: carrots themselves don’t increase your ability to see in the dark. However, carrots can still have a positive impact on your vision: they help your body produce vitamin A, which is necessary for maintaining healthy eye function.

How Where did the story come from? 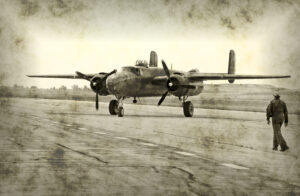 The myth was started by the British Air Ministry in World War II as an attempt to trick the German air force and encourage the citizens of Great Britain to eat more vegetables.

During the war effort, the Royal Air Force (RAF) began to attribute their pilots’ visual accuracy (especially at night) to eating carrots. In reality, they had invented the still top-secret RADAR technology which was enabling their pilots to track and target German planes without the use of sight.

Carrots were also promoted through propaganda related to the enforced blackout which occurred across England from September 1939 to April 1945, during which the level of light allowed at night was strictly minimised to make it harder for enemy bombers to see cities. The public were told that carrots “keep you healthy and help you to see in the blackout”

Why were carrots chosen?

Carrots were chosen because they were a surplus vegetable in Britain at the time, could be grown in most areas by average British families (making them cheap), and weren’t rationed during the war.

They were also chosen due to their levels of Beta-Carotene, an antioxidant which is used by the body to produce Vitamin A and has been shown to have a positive effect on low-light vision and preventing nyctalopia (night blindness).

How does Vitamin A help eyesight?

Vitamin A is needed to form rhodopsin, a reddish-purple pigment which your eyes need to effectively see in low-light conditions. As a result, deficiencies in Vitamin A can lead to reduced eyesight, nyctalopia and, in severe cases, blindness. This means that If you have a Vitamin A deficiency, eating carrots could help to correct and improve your night vision, but only to match the capabilities of an average person in ordinary health – it won’t give you the ability to see in complete darkness or at a higher than average level.

Where else can I find Vitamin A?

Vitamin A itself doesn’t occur in plant foods. It only occurs in animal foods, as the process needed to break down the beta-carotene (the antioxidant which the body needs to produce its own Vitamin A) has already taken place in the body of the animal which produced the food. This means that foods like eggs, liver meats, fish, and cheese are the best sources for Vitamin A in its raw form, particularly if you are part of the 45% of the population who have a reduced ability to convert Provitamin A into Vitamin A.

What is Beta-Carotene and where can I find it?

Beta-carotene is a red-orange pigment found in plants and fruits, especially brightly coloured ones. Along with its counterpart alpha-carotene, it is known as Provitamin A and is converted by the body into Vitamin A itself. Although it gets its name from “Carota” (the Latin word for “carrot”), it can also be found in a variety of other vegetables.

It is particularly high in sweet potatoes, which is why Africa’s Agricultural Research Council is promoting them to farmers in order to help prevent blindness in children. It’s found in many other orange foods, including oranges, apricots, peaches, and pumpkins. It can also be found in dark, leafy greens, like kale, collards, and spinach.

If you are noticing a decrease in your vision (during daylight or darkness) speak to your General Practitioner for a referral to Westside Eye Clinic.

Specialist Ophthalmologist Dr Joseph Park offers the latest treatments for a wide range of optical issues at Westside Eye Clinic. Call us on 07 3715 5555 to discuss your condition.